Some solvents used in consumer products are linked to neurological problems and increased cancer risk.

Solvents are a diverse class of chemicals that are used to dissolve or disperse other substances.

Where are they found? 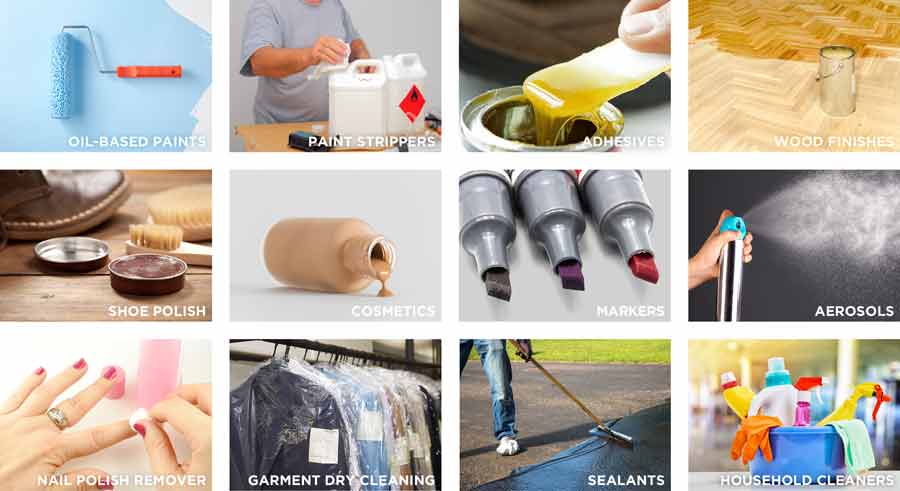 What are the health concerns?

Breathing solvent vapors may lead to temporary nervous system symptoms, such as headaches, dizziness, and brain fog. Long-term occupational exposure to some solvents (including methylene chloride, perchloroethylene, trichloroethylene, and benzene) may increase cancer risk. Exposure to high levels of the main solvent used in paint strippers (methylene chloride) without adequate ventilation can lead to asphyxiation or death. However, even lower-level exposure to some solvents may lead to permanent harm. For example, early life exposure to perchloroethylene in drinking water is associated with adverse neurodevelopmental effects.

How are we exposed?

Solvents evaporate from products and become mixed with the air we breathe. We can also absorb them through skin contact. Some solvents, particularly perchloroethylene and trichloroethylene, are common groundwater contaminants and can end up in drinking water. People who work with gasoline, paints, finishes, and dry cleaning products are at the greatest risk of problematic solvent exposure.

What are the environmental concerns?

These solvents enter the environment by emissions from product use, dry cleaning, gasoline, and metal degreasing industries and by spills or accidental releases to air, soil and water. They react in the atmosphere in sunlight, producing ground-level ozone which is a main component of smog and negatively affects human, animal and plant health. Chlorinated solvents are slow to break down in soil, posing a threat to groundwater aquifers and ecosystems. In fact, trichloroethylene is the most common organic contaminant found in groundwater.

Should they be used?

When toxic solvents are phased out, they are often replaced with similar solvents. For example, toluene has largely been phased out in nail polish, but is replaced by its chemical cousin xylene which appears to have similar effects. In dry cleaning, perchloroethylene is often replaced in by another organohalogen solvent, 1-bromopropane, which is also a likely carcinogen.

What Can You Do?

Other Videos on Some Solvents

Where have all the toxic chemicals gone? Arlene Blum at TEDxWellesleyCollege